This is a sequel to “Open Your Eyes, Kitty!”, published on May 25, 2014 on Writewireless. It is basically a true story. Only the names and some of the details have been changed to protect the feral—and the domesticated as well.

When I heard the knock on my door, I thought it was someone else—wandering friends who show up occasionally. When I looked through the peep-hole, it could have been Jehovah’s Witnesses. Two ladies, casually dressed, on the other side of middle age. I opened the door. One had white, somewhat tousled hair, and was holding a long cage with a bowl of food at one end. Her face was soft and malleable and looked forgiving. Her companion was thin, with streaky gray hair pulled back into a severe ponytail.

Her voice was strident, and clung to the high registers like the nervous claws of an excited feline, ready to dart off at any minute.

Her long, drawn face looked dry, with faint, parallel wrinkles along her cheeks. Speaking rapidly in clipped tones, her vowels irritatingly sing-songy, the latter explained the urgency of their task in a rehearsed manner: “We are volunteers who save feral cats. We spay or neuter the adults and give them their shots. Then we release them back where we found them.” Her voice was strident and clung to the high registers like the nervous claws of an excited feline, ready to dart off at any minute. “We try to get the kittens before they get too wild, and we vaccinate and spay or neuter them. If they can be socialized with humans, we put them up for adoption. If not, we return them where we found them. We have to catch them at the right time, before their mother teaches them to hiss at humans. We always clip off the end of their ears after we fix them. We already caught the white mother cat and the little sickly white one. We know there are three more kittens in the litter. Your neighbor told us you have kittens in your backyard. May we put out a trap for them?” Her eyes darted around furtively as she spoke, as if sizing me up in some way.

When I could get a word in edgewise, I told Ilse and Martha that my teen daughter Amy and I had held the white runt (whom Amy had named Alphonse, after a Full Metal Alchemist character), and that we had looked up her condition on the Internet. We had wiped the goo out of her mucous-closed eyes with soft cotton balls and water with a pinch of baking soda in it. Over the following weeks, Amy had caught her a few more times, gently wiped her eyes again, and played with her. Al didn’t seem to mind being caught, and had soaked up the care and attention. Martha cocked her fuzzy white head to one side as she listened to our story. She seemed sympathetic, but remained mute.

I welcomed Ilse and Martha’s appearance as an eerie miracle. Ever since we had discovered Al’s condition several weeks earlier, we faced a dilemma: either take the kitten to a vet who would charge a lot of money, or bring her to the SPCA, where she would almost certainly be euthanized. These ladies had the perfect alternative that would save the cats and not cost us a dime. I thanked them for materializing out of thin air to answer my unuttered request. Weird how they knew everything, I thought.

We had been there when Mama Kitty had given birth to the four little furry bundles, who nursed under the big red geranium bush. They had romped adorably in our backyard, and Amy had pleaded with her dad to let her keep Alphonse and take care of her. “Outdoor cats belong outdoors,” he had said. Surreptitiously, we had gone to Petco and bought really good kitten food, on sale. We had snuck Alphonse into the enclosed back porch and put her in a plastic box. When he found out, Dad said he was allergic, and ordered Al’s immediate expulsion. Amy reacted with a mixture of sadness and indignation.

Then several days had gone by when we didn’t see the kittens or Mama Kitty.

As I led the Feral Cat Ladies to the back yard, Ilse continued: “The little white one doesn’t look good. It had all that gunk in its eyes and it’s half as big as the others. It probably has an upper respiratory infection, and maybe more. We brought it in to the Feral Cat Shelter in San Mateo, and it’s being taken care of right now. It’s good that your daughter socialized it. It has a better chance of being adopted.” Her nose twitched once, and for a brief moment in the late afternoon sunlight, the faint, long wrinkles on her cheeks looked like whiskers.

Her nose twitched once, and for a brief moment in the late afternoon sunlight, the wrinkles on her cheeks looked like whiskers.

We agreed to let them leave the cage in our yard, at the entrance to a tunnel of bushes against the back fence, where the kittens and their mom had often played and hung out.

“We’ll be back to your yard before 6 a.m. tomorrow to get the cage,” Ilse informed us tersely.

At 5 a.m. Amy was throwing lit matches onto the concrete driveway leading to the backyard gate. She had been up all night. Seeing Martha approach in her peripheral sight, she thought, “Oh no, another adult here to lecture me about playing with fire.” Martha told her that they had caught the three kittens (the two gray ones and the black one with white spots) in the neighbor’s yard. Alphonse had gotten her shots and was being put up for adoption, she said.

Amy was too taken aback by her sudden appearance to think of asking what had happened to Mama Kitty and the other kittens.

Amy broke the news to me as I sipped my coffee a few hours later. “Well that’s good! I said. Someone is going to adopt Alphonse and take care of her.” Her silence endorsed her sense of betrayal. “Why couldn’t I adopt her? Those women think they’re God. What gives them the right to steal kittens? Why is it OK for them to sterilize the mom? We’ll never have kittens in our yard again!”

I suddenly felt guilty, like an accomplice to a kidnapping.

Two days later as I was going to my car, I saw Mama Kitty in the driveway, consulting with her sister. Her left ear was rounded. She looked up when she saw me. She seemed disoriented, and seemed to implore me with her eyes. “She’s wondering where her babies are,” Amy said. I suddenly felt guilty, like an accomplice to a kidnapping.

Later that afternoon, my next-door neighbor told me that the Feral Cat Ladies had let themselves into our yard—or were about to, that day when we first encountered them. The neighbor had told them, “The owner is home. You’d better knock on their door and ask, first.” I also learned that they had been in the yard two doors up, placing a cage without permission, and had been confronted by the neighbor’s daughter, who had seen them from the back window. “Hmmm,” I had thought to myself. “Pretty feral behavior.”

While watering my flower beds in the gathering dusk, I heard a low yowling sound, as of muted, derisive laughter. I turned my head and looked up in time to see two figures of human height disappearing around the corner of the block 100 feet ahead. As the sinking sun gave way to darkness and the waning crescent of a moon, I could just make out what looked like the tips of two tails behind them: one slender and gray, and the other a fuzzy white cotton puff. 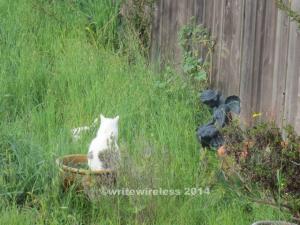 I am a thinker, educator, and writer, who teaches English, French, design, and career skills. My articles and posts about being human, teaching, careers, parenting, travel, and world affairs have been published in various newsletters, websites, and blogs. I currently teach and inspire young people to write and to explore the world. View all posts by Writewireless

5 thoughts on “The Feral Cat Ladies”

This site uses Akismet to reduce spam. Learn how your comment data is processed.